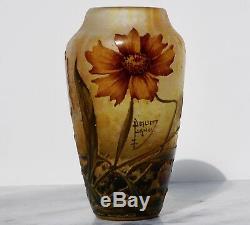 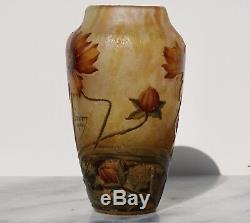 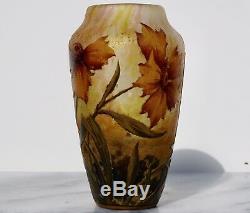 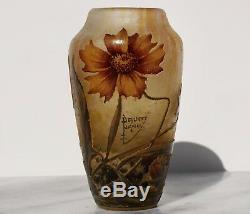 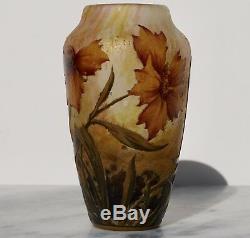 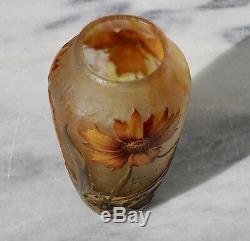 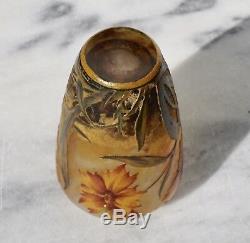 Daum Nancy French enameled cameo glass vase, circa 1910. Depicting six beautiful orange and red flowers from budding to full bloom stages with leaves and grasses. Thick wheel carved and acid etched with enameling in greens, blues, oranges and reds. A beautiful edition to any Art Nouveau and Art Deco decor. Measures: Height 4.6 inches. Signed in Cameo: "Daum Nancy" with the Croix de Lorraine. Daum is a crystal studio based in Nancy, France, founded in 1878 by Jean Daum (18251885). His sons, Auguste Daum (18531909) and Antonin Daum (18641931), oversaw its growth during the burgeoning Art Nouveau period. The Daum family worked at the beginning of Art Nouveau and creators of one of France's greatest glassworks.

Established at the end of the 19th century, Daums renown was originally linked to the Ecole de Nancy and the art of pâte-de-cristal, a major contributing factor in terms of its worldwide reputation. During the Universal Exhibition of 1900 Daum was awarded a Grand Prix medal. Daum glass became more elaborate, acid etching (by Jacques Gruber) was often combined with carving, enamelling and engraving on a single piece of glass to produce creative glass master-pieces.

[citation needed] The most complicated creations also feature applied glass elements, such as handles and ornamental motifs in naturalistic forms. The Daum brothers quickly moved on to become one of the major forces in the Art Nouveau movement, seriously rivalling Gallé, so much so that when Émile Gallé died in 1904 they became the leaders in the field of decorative glass. The item "Daum Nancy Cameo Enameled Art Nouveau Vase" is in sale since Monday, November 19, 2018. This item is in the category "Pottery & Glass\Glass\Art Glass\French\Daum".